UNBELIEVABLE!! Burna Boy’s D!ck Is Too Small? His Ex-girlfriend Stefflondon Finally Revealed Why They Broke Up (SHOCKING) 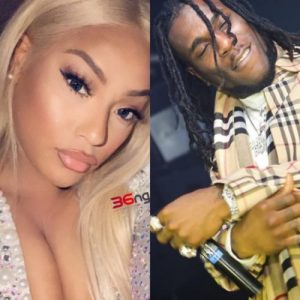 She says it’s because of his fragile Ego and his performance in bed.

She also said that Burna sees Wizkid as a competitor. 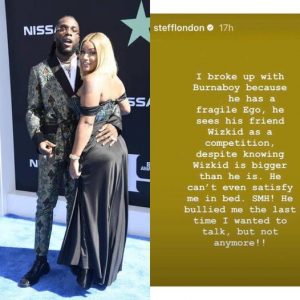 You recall, Burna had reportedly ended things with his lover and British-Jamaican artiste, Stefflon Don, whom he dated for some time. The ‘Last Last’ crooner took to Instagram in the latter part of 2021 to make a cryptic post insinuating that he was single. He wrote, ‘and for your information, Odogwu does not have a wife’.

MY OPINION:
I don’t believe in all these trash. I think she’s pained and tryna get back at Burna.

Burna Boy broke up with her because she has a son. According to reports, the British singer and the Grammy winning singer parted ways after he found out that she had a son.

Any woman that wants to shame her Ex will definitely use “He is not good in bed or he can’t satisfy me in bed”. Burna boy is better of without her.

Also, I think she wants to cause trouble between Wizkid and Burna Boy.