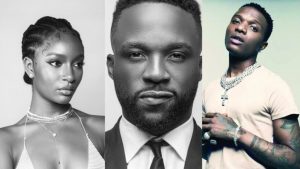 Top 10 Nigerian songs released in September 2022, here is an ungraded list compiled by FroshNaija.ng for you.

October was indeed a busy month of fresh and hits Naija released songs. The likes of Wizkid,  Bella Shmurda, Ayra Starr, Lojay, Bad Boy Timz and the new YBNL hot boy in town, Asake all made a great appearance. With Asake releasing his much anticipated studio project “Mr Money With The Vibe” while Starboy Wizkid made a return with a melodious single titled “Bad To Me“.

Check out the top 10 Nigerian songs released in September 2022.

The new hot boy in town, YBNL star, Asake released his debut studio album “Mr Money With The Vibe” and off from the album, we have a hit amazing sound titled “Organise” currently the No.1 song on Apple Music with over 1.6 million views on Youtube.

However, one of his old song released in 2019 “Kanipe” made it to the internet surface and seems to be pulling streams.

Well known and celebrated Nigerian singer and Starboy Entertainment Music boss, Wizkid made a return to the music scene a new single titled “Bad To Me“.

Production credit to his record producer, P2J. The song currently has over 2.3 million audio views on Youtube.

Olorunyomi Oloruntimilehin professionally known as Bad Boy Timz is a Nigerian singer and songwriter. He made a comeback with a new single tagged “Big Money“.

Production credit to Oluwadurotimi. The single which currently has over 750,000 views on on Youtube.

Iyanya Onoyom Mbuk, known by his stage name Iyanya, is a Nigerian Afropop singer. Seems he’s not ready to slow down this year, he has been dishing out solo singles since the beginning of this year and here we are with a new sound titled “One Sided“. Production credit to Shugavybz.

Oyinkansola Sarah Aderibigbe, known professionally as Ayra Starr, a Nigerian singer and Mavin Records signee. If not mistaken, the Sabi Girl just gave us the song of the month.

The new song “Rush” which debuted at Top 100 Naija Music, claiming the No.1 spot on Apple Music Nigeria.  It currently has over 2.4 million views on Youtube.

Lekan Osifeso Jnr. popularly known as Lojay, a Nigerian musician, singer and songwriter. He released an amazing single “Leader” which was produced by P.Priime. The music video has over 810,000 views on Youtube and currently on Turntable’s Top 100 at No. 51.

The talented Nigerian singer and music producer is not slowing down this year. The Dada crooner made a new appearance with this classic sound “Xtra Cool” which is already racking up numbers on all streaming platforms.

Yemi Eberechi Alade, a Nigerian Afropop singer, songwriter, actress and activist. She unleashed out a new soundtrack “Bubble It” featuring Jamaican dancehall singer, Spice who did blessed the song with a melodious verse. The video already has over 4.7million views on Youtube.

Show Dem Camp,  a Nigerian rap duo composed of Wale Davies and Olumide Ayeni. They made a shocking appearance with their newly released studio project “Palm Wine Music Vol. 3 album” and off from the project, they teams up with Tems on a song titled “Live Life”

No doubt, the song is making it way up the chart soon.